Legend has it that in the 1970s in Anchorage, Alaska, a man walked into his local Nordstrom store and tried to return a set of tires.

And Nordstrom accepted the return.

Years before the local miner had bought a set of tires from a company called Northern Commercial, located in that same space. He had been promised that if the tires didn’t work for him, he could return them. In the intervening years, Nordstrom purchased Northern Commercial and opened its own store, selling women’s clothing and shoes.

But no matter. Craig Trounce, the 16-year-old customer service representative behind the counter that day, called a local tire dealer, found out the fair value for the tires (which was $25), and paid the miner $25 from the Nordstrom till.

Trounce was staying true to a primary Nordstrom principle: always serve the customer. 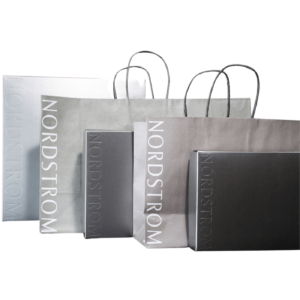 It’s clear today that “Nordstrom Nice” is a strategy that has paid off. The family-controlled business runs more than 350 Nordstrom, Nordstrom Rack, and Nordstrom Local stores across the United States and Canada, and has a market value of US$3.9 billion as of June 2022. The company has an average of 60,000 full- and part-time employees, a number that swells to 72,000 during the holidays.

But let’s start at the beginning…

The tire story (and so many like it) are what make up the lore of the Nordstrom brand. And it’s little wonder. The family behind the company – also named Nordstrom – seem to be about as nice as they get. So much so that most of the time the company has been run by a committee or team of family members, all of them receiving the same pay, many of them reluctant to take on titles that put them above others in the family.

The “sole” of the company

Sixteen-year-old Sweden born, John W. Nordstrom emigrated to the United States in 1887, speaking no English and with just $5 to his name. He travelled the country trying to make a living, working in logging and mining camps, before heading north to Alaska during the gold rush in 1897. Two years later he arrived in Seattle with $13,000, some of which he invested in starting a shoe store with a partner named Carl Wallin. Wallin & Nordstrom opened at Fourth and Pike in Seattle in 1901.

A company run by a committee

The second-generation Nordstroms took over the family business young: Everett was 26 and Elmer was 24. John’s third son, Lloyd, joined as an equal partner in 1933 when he graduated from the University of Washington. The young men divided responsibilities in the company but held no titles. In 1938, Nordstrom was incorporated, and so by law, they were required to formalize their roles. The eldest, Everett, did not want to be unfair to his brothers, so they settled on a rotating system of titles (president, vice president, and treasurer/secretary), all of them exchanging titles every two years.

Nordstrom continued to grow, expanding especially rapidly in suburban areas after World War II. They began leasing space in department stores, along with eight standalone stores of their own and were the largest shoe store in the country by the end of the 1950s. That’s when they made moves into women’s clothing, acquiring retailers Best’s Apparel and Nicholas Unger.

The third-generation Nordstroms (Everett’s son Bruce, and Elmer’s sons James and John) had started working at the company as kids, sweeping floors and breaking down boxes. By the late 1960s, they were vice presidents at the company.

Throughout their time leading Nordstrom, Everett, Elmer, and Lloyd had paid themselves equal salaries. Enough to look after their families, but nothing more. Everything else they reinvested back into the business. In 1967, they didn’t have the money to retire, so they were considering selling the business. Bruce, James, John, and Jack McMillan, Lloyd’s son-in-law, teamed up with Robert Bender, the first non-family executive, to become “The Five.” They convinced the second-generation owners to sell them the company. Unfortunately, The Five lacked the capital to buy out their shares, so the family took Nordstrom public in June 1971. The company was renamed Nordstrom in 1973 and surpassed $100 million in sales that same year.

So once again, Nordstrom’s leadership was in many hands. The Five ran the company in a decentralized method that often-confused outsiders (especially investment analysts) – but it worked. Nordstrom’s sales grew, and expansion began anew and continued through the decades. By 1990, they had 58 stores and $2.7 billion in sales.

In 1991, The Five were ready to move on. The four Nordstroms became co-chairmen. The fourth-generation Nordstroms were seen to be too young and inexperienced to lead the company’s rapid growth. The Five instead named four friends and managers as co-presidents, keeping with the tradition of leadership by committee.

But it didn’t work. Differences of opinion about how the company should be run meant the new co-presidents couldn’t work together, and Nordstrom experienced a record drop in profits in the first quarter of 1993. Two co-presidents were ditched, and the company continued with the other two, along with six members of the fourth generation serving as executives.

In 1996, one of the presidents retired, leaving the other, John Whitacre, to lead as Nordstrom’s first-ever CEO. It was also the first time the company had been run by just one person (and a non-family member at that). Six Nordstrom family executives were named co-presidents, an arrangement that one industry consultant called “insane.”

Whitacre nearly doubled the size of the Nordstrom chain, but then things started to go downhill. Criticisms over high costs, low productivity, some expensive investments in information technology, and finally, a rumor that Nordstrom was for sale, caused the stock price to lose half its value between January 1999 and the end of 2000. The board asked Whitacre to step down, and in 2000 he did.

The board cast about looking for another outsider to run Nordstrom without success. Finally, Bruce Nordstrom (one of the then-retired chairmen) suggested bringing in fourth-generation Nordstroms to lead. The board did not want group leadership but agreed to put Bruce’s son Blake in charge, provided that Bruce would return as chairman. The deal was made. Blake’s brothers, Peter and Erik, both stayed on as executives.

The return to family management was hugely successful – sales increased to $7.1 billion by 2004, expenses dropped, and gross profits reached a new high. Blake was the sole president but in practice ran many of his decisions by his brothers. He appointed Peter to head store merchandising, and Erik, to store operations. In 2015, Peter and Erik officially became co-presidents with Blake.

An attempt to privatize

In 2017, a group of Nordstrom family members, including Blake, Peter, Erik, and Bruce, signaled that they were interested in buying back Nordstrom and taking the company private again (the family group held about 31 percent of the company stock at the time).

The Nordstroms argued that public scrutiny made it difficult to make large, but needed, investments to stay competitive in an increasingly online retail environment. If the company was private, they argued, they could take a longer view without the need to constantly produce short-term profits. The Nordstroms, in partnership with private equity firms, made an offer to the board of $8.4 billion, about $50 per share, in early 2018. The board rejected the offer, saying it was too low. The family was unwilling or unable to raise further capital, and so the negotiations ended shortly thereafter.

There were some reports that the board considered appointing a non-family CEO after rejecting the privatization offer. Asked about this, Peter said: “What’s been made clear to us is this is not an entitlement program. It’s a public business and we need to perform and we need to be accountable.” 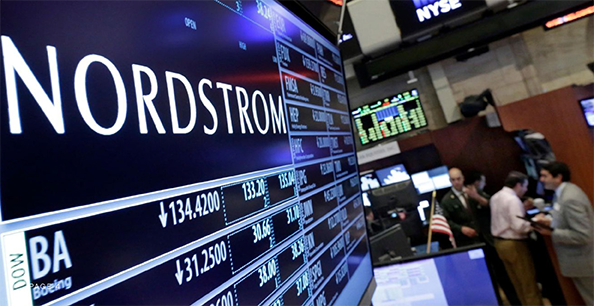 Co-president Blake wrote an email to Nordstrom staff in December 2018, announcing that he had been diagnosed with lymphoma. He said that cancer could be treated and that he and his doctors were “optimistic and encouraged” by the prognosis. He said that he would continue working as he received chemotherapy. It came as a shock then, when just one month later, Blake died at the age of 58.

Peter and Erik continued to run the company as co-presidents. They made all major decisions together and met on Monday mornings to discuss issues so that they could present a unified front to the executive team.

The Nordstrom family sometimes shies away from the spotlight, and so surely, we don’t know all of the drama that might happen when the curtains are closed. But from what we do know they are good to employees, always putting the customer first, and, of course, good to each other; working together, often by committee, to run the company.

What happens when there are no Nordstroms to take over?

As we’ve seen, Nordstrom has been at the top of its game when members of the Nordstrom family have been calling the shots. And often with this family, it’s a team effort. Bruce Nordstrom once said the secret to Nordstrom’s success “was that family members running the company in each generation have shared a deep respect for one another and have always worked as hard as they could.” 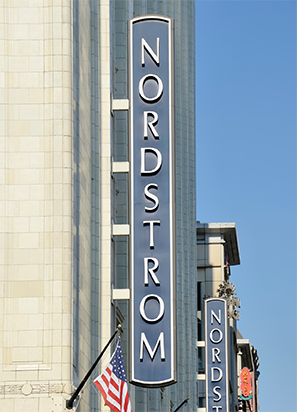 But Nordstrom now is a huge, complex business. As of May 2022, revenues totaled $15 billion and the company was ranked 245th in the Fortune 500. It is a long way from the small, single shoe store of the 1920s, which John Nordstrom’s sons took over when they were in their 20s, with little practical experience.

Today the business requires leaders with education and a breadth of experience. It took the current leaders, Peter and Erik, about 20 years to get where they are in the company. And the two believe that it would take the fifth generation just as long to build up the know-how to run the company well.

The problem is, there is just one Nordstrom family member from the fifth generation currently working in the family business: Blake’s daughter Alex, who started in the company in 2020 as an assistant buyer. She won’t be ready to captain a team for many years, and certainly not by the time Peter (aged 60 in 2022) and Erik (58) are ready to retire.

So how the Nordstroms, who still own 30 percent of the company, navigate this next transition will be interesting to watch. They will have to depart from the unconventional, but largely successful, family management structures they have used in decades past.

“We all inherently believe, whether our last name is Nordstrom or not, that two plus two equals something greater than four- i.e., that one person trying to run this business is not going to be successful, whatever the assignment is,” Blake Nordstrom said in the early 2000s.

Peter and Erik are reconciled to the idea that it will be non-family “outsiders” running the business in the near future. There are up-and-coming executives in the company that may one day take the lead.

One thing is certain: Nordstrom – the company and the family – will be a name to watch for years to come, as they chart a new course across this unrecognizable landscape. And for a family that has made their name synonymous with “nice,” it’s easy to root for them.

Sarah Reid is a freelance writer based in Toronto.